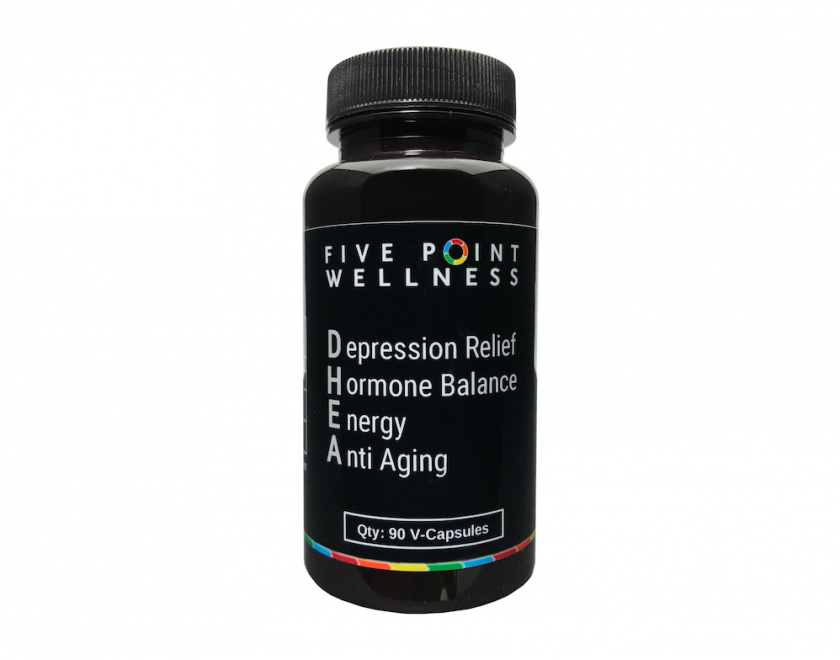 If you are a male or female, over the age of 30, and have noticed mood changes, irritability, sadness, low energy, low sex drive, loss of muscle mass, or loss of bone density; you've likely got symptoms associated with low-T also known as Low Testosterone.  Yes, both men and women have varying levels of testosterone in their bodies.

With DHEA you should notice an improvement in the above-mentioned symptoms within 2 to 4 weeks depending upon how old and how much your DHEA is depleted.  DHEA is safe for anyone above the age of 18 that either just wants to re-balance their DHEA and testosterone or even the bodybuilder looking to improve his workout and build muscle mass.

Many people have reported some of the most noticeable and immediate changes such as more energy, better sleep, increased concentration, and better sex drive.

Helps improve bone density.  There is strong evidence to support that higher DHEA levels are linked to denser bones.  When you are taking supplements of DHEA in conjunction with normal levels of vitamin D and calcium your bones will not lose its density as quickly during the aging process.  It is important to note that DHEA alone cannot and will not increase your calcium and vitamin D levels.  Many people may need to take supplements for all three nutrients to maintain healthy levels of bone mass.

Helps improve the ability to metabolize and reduce fat (i.e. weight).  Normal levels of testosterone involve four methods of production.  First, your hypothalamus in your brain tells your pituitary gland how much testosterone needs to be produced which then sends a single to the testicles to create the bulk of the testosterone in males only.  Second, in men and women, the adrenal glands located on the top of your kidneys produce DHEA that is then converted to testosterone.  Third, regular sleep, exercise, and a balanced diet will help the body’s ability to produce testosterone.  Fourth, taking supplements of DHEA will help boost your testosterone.  Wild yams contain a plant hormone called diosgenin, which is converted to DHEA to manufacture dietary supplements.   When testosterone levels are normalized it helps the body boost metabolism, in turn, give you the ability to metabolize fats more efficiently.

Helps improve symptoms associated with decreased libido and sexual stamina.  Research has demonstrated lower levels of DHEA in men with erectile dysfunction. There is sufficient evidence to support that supplementing your diet with DHEA often helps benefit people with decreased libido and sexual stamina.  Many male research subjects have reported that when taking DHEA they noticed an improvement in a quality erection.

Helps improve symptoms associated with the typical aging process.  This is often referred to as Anti-aging.  The exact cause of aging is not fully known; however, the scientific community defines aging as the accumulation and damage of the DNA through dehydration and oxidation. Dehydration and oxidation cause the body to slowly deteriorate over time.  The deterioration process is also known as DNA and Telomere shortening.  The end result is eventual death.  By supplementing your diet with DHEA, there is sufficient evidence to show that it slows the deterioration and telomere shortening process.

Helps bolster the immune system in people that have been affected by viruses or bacteria.  Many viruses and cancers cause free formed radicals, also known as free radical cells.  Free radicals cause oxidation and dehydration.  There is good evidence to suggest that supplementing one's diet when infected by a Virus or Bacteria will potentially help with the recovery process.

Helps improve symptoms associated with chronic fatigue syndrome.  The root cause(s) of chronic fatigue syndrome is not fully known; however, in the majority of cases diagnosed it is usually preceded by a viral infection such as Epstein-Barr, herpesvirus 6 and mouse leukemia viruses.  It is believed that when one has acquired such an intense virus as these it puts a lot of stress on the various systems of the body which in turn causes significant dehydration and oxidation.  There is good evidence to suggest that supplementing your diet after having acquired one of the types of viruses will improve your fatigue syndrome.

Helps improve coronary artery disease.  Coronary heart disease (CHD) is a disease in which a waxy substance called plaque builds up inside the coronary arteries. These arteries supply oxygen-rich blood to your heart muscle. When plaque builds up in the arteries, the condition is called atherosclerosis.  As testosterone decreases during the aging process the production of High-Density Lipoprotein (HDL) decreases, in turn, Low-Density Lipoprotein’s (LDL) increases.  When LDL increases atherosclerosis begins to occur.  There is good evidence to suggest that supplementing your diet with DHEA will increase testosterone production which then will help elevate your HDL to then break down the LDL instead of it sticking to the artery walls.

Helps improve symptoms associated with insulin resistance and type II diabetes.  Low testosterone and DHEA levels have been correlated with insulin resistance which often transitions to type II diabetes.  Insulin resistance is defined as the body’s ability to produce insulin but the insulin that is produced is no longer effective in metabolizing blood sugar.  Blood sugar builds up in the bloodstream rather than being absorbed by the cells to utilize as energy.  When insulin resistance goes unchecked for prolonged periods type 2 diabetes usually develops.  There is good evidence that by supplementing your diet with DHEA, it will help increase testosterone production which will combat the dehydration and oxidation of insulin allowing the body to effectively metabolize free-floating blood glucose.

Helps people that take opioids prescription and recreationally by increasing DHEA levels thereby increasing testosterone.  Several studies have shown that long-term use of opioids has an effect on the central nervous system and endocrine system by slowing their ability to function at optimum levels.  More research needs to be done on this topic but the scientific mechanism of action and data collected as secondary endpoints in various published studies suggest that there is evidence to suggest by taking DHEA it will help increase testosterone production which could combat the dehydration and oxidation of cells in the central nervous system and endocrine systems.

Helps people that are addicted to opioids both prescription and recreation-type opioids in minimizing the symptoms of withdrawal.  Common symptoms of withdrawal include but are not limited to:  increase heart rate, chills, flushing, sweating, restlessness, pupil dilation, runny nose, watery or teary eyes, nausea, vomiting, fatigue, anxiety and goose flesh skin.  There is some evidence that by supplementing your diet with DHEA, it may help increase testosterone production which will help the body’s ability to reverse the dehydration and oxidation process that occurs due to long-term use and abuse of opioids.

Helps people with decreased cognitive function (thinking), concentration and working memory.  There is a link between memory processing and normal levels of DHEA and testosterone.  By supplementing your diet with DHEA you may have some improved memory and concentration.  More research is warranted in this area; however, the science would suggest that there is a strong link between the two.

Suggested use:  Take 1 to 3 capsules per day with or without food.  Do not exceed 3 capsules in a 24 hour period.

C-max/T-max: approximately 4.3 hours.  C-max is a term used that refers to the maximum (or peak) serum concentration that a product or drug achieves in. This is Important to know to help prevent taking additional doses within that time frame.

Half-life:  about 12 hours.  Half-life is defined as the time required for the product or drug to decrease by half.

When taking too high of a dose for extended periods of time some adverse side effects can occur such as:

A serious allergic reaction can occur when consuming any food, nutritional supplement, or medicine.   If you experience any of the below side effects seek immediate medical attention.

This is not a complete list of possible side effects. If you notice other effects not listed above, contact your medical provider.

Nutritional supplements are classified as a food by the US Food and Drug Administration (FDA). Supplements do not require the same rigorous testing, review and approval that drugs are required to go through. Therefore, the statements contained in this document regarding DHEA have not been reviewed and approved by the FDA. However, significant research has been done on this product by many universities, public and private business. We at 5-Point Wellness, LLC desire to share information about DHEA, in order to educate our clientele to make well informed decisions for themselves.

If you have purchased DHEA and have an accout, you can login and rate this product.

Lab testing is coming soon! We appreciate your patience.